Growing up, in western Illinois about 3 miles from the Mississippi River I was like most kids my age. I had what you might consider a Tom Sawyer childhood, except we didn’t have picket fences in our neighborhood to paint.

My mother won a bicycle for me at the local grocery store at Christmas time which was also within days of my 12th birthday.

I loved riding my bike, and spent hours on it, often going on long rides to explore. I remember losing track of time so many times, just enjoying the freedom and adventure that it brought me.

It was a particularly warm summer day, and my Mom warned me as I left the house that I had better not be late getting home, because we were packing and would be leaving early the next morning on a family trip.

Barely hearing her words, I raced out the door, jumped on my bike, and I was gone. I had hours before I had to get home, and today I was going to see how far and fast I could go. 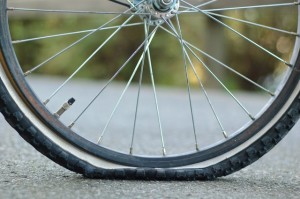 Deep into my journey, I was further away from home than ever before, and realized that my bike was getting harder and harder to peddle. As I looked down, I could see the rubber of the front tire spreading out – because the air was leaking out of the tire. “Oh man! A flat tire – the last thing I need today!”

Suddenly, my Mom’s words echoed in my head, and I felt the anxiety as I tried to figure out how I could get home on time. The decision I made at that moment turned out to become one of the most powerful lessons I’ve learned in my entire life – and I believe this lesson is one of the keys for you to make the changes you need to make in your life and career – right now.

When my tire went flat, all I could think about was that I had to get home. I didn’t have time to stop at a gas station or go to neighbors for help. I thought I only had one option – to ride the bike and peddle as hard as I could, because if I wasted any more time, I would never get home.

So, I headed for home, struggling to peddle that bike with all my strength. As you can imagine, peddling a bike with a flat tire takes 10 times more effort than if the tires are full of air. On top of that, riding with a flat tire destroys the rim and wheel of the bike, causing even more damage.

Not only did I feel like I was going to die on that ride home from exhaustion, I ended up 2 hours late and paid the price for holding up the entire family from leaving for the lake.

Now, had I decided to actually stop and get help to fix the tire, it might have taken me 30 minutes – but then I could have ridden the bike at full speed. I would have easily made up the time, but like most people do in their life and career, the only thought I had was that I didn’t have time to stop for anything.

As painful as that experience was for me at 12 years old, it taught me one of the most profound and powerful lessons I’ve ever learned – and amazingly, it reveals one of the biggest errors many people, especially those of the male gender, are making today.

Many men that I’m teaching or speaking with these days feel like they’re running on a treadmill – doing everything they can to keep up with an endless to-do list, trying to adapt and change to uncertain conditions, among all the chaos.

They’re tired, they’re frustrated, and they’re overwhelmed … but they don’t feel like they have any time to just ‘take a breath’ or think about the big picture or to find a better solution.

They can’t stop because they’re doing everything just to keep things moving forward, and to generate enough income to keep the lights on and food on the table.

Some years ago, I owned a medical clinic, truth be told it was more like it owned me. I was peddling very hard to keep everything running. A good friend mentioned a book, and urged me to read it. So I stopped, bought the book and read it several times. (More about this book later.) Within weeks I had a new outlook and new confidence.

In straight forward, easy to understand language it outlines how to …

The forward said the wisdom in this book can prepare you for true prosperity, for an experience of abundance, no matter what the economy is doing. These principles are tested, proven and of life-changing value. The real question is, are you aware of what is going on in your life today and have you come to an expanded consciousness of
the presence of God/spirit.

One of the biggest lessons I learned was in the last Chapter – A New World Vision. In the last chapter he recalled a story of a man that had a dream. He believed that economically deprived people could be spiritually rehabilitated and brought up into a middle-class experience.

With the cooperation of the New Jersey state unemployment and welfare agencies. He was given the names of 500 chronic unemployables.

These were people who had been unemployed for at least two years, during which time they had given up any hope of finding work and had settled into the support of the welfare system.

These people were invited to enroll in a two-week crash course in building consciousness, changing their self-image, learning to think positively, learning how to focus their skills and get a job.

Finally, at the end of the two weeks of concentrated training and already showing signs of new confidence, these people were turned out to seek employment on their own.

They were given no leads nor help of any kind. In a sense, their tutors simply said, “Okay, now go out and find jobs.”

Within six months 80 percent of the group of 500 people were gainfully employed.

When will you stop long enough to fix your flat tire?